I’m having a wicked case of writer’s block right now. You know those days when you have a million and one ideas floating through your head but there are so many different things you want to do, see and accomplish that you can’t slow down your body or brain enough to do them. None of the ideas floating through my head seem quite right… and so I’m going to write about something completely off topic.

Something that you may not know about me is that my day job is as a Children’s Book Publicist. It’s a pretty kick ass job. I get to work with wonderful, creative people– authors, illustrators, media folks, my co-workers. Plus I always have really fabulous children’s books hitting my desk. No I do not get to read all day. Yes I do have access to great books to read in my off time.

A couple times a year I get to travel for my job. Usually it’s to Toronto to meet with media or to San Francisco to hear about books coming from Chronicle Books. I’m hoping that one day I’ll get to make a trip to New York for BEA (Book Expo America) or to visit the Macmillan offices. 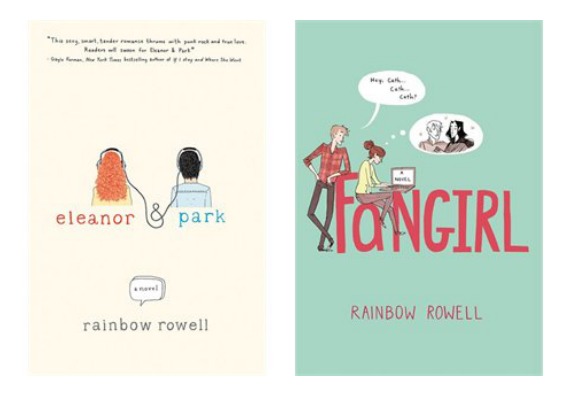 Earlier this week I headed to Toronto to  escort Rainbow Rowell the author of Eleanor & Park and Fangirl. Having read 3 of Rainbow’s books I had a sneaking suspicion that I was going to love her and have a lot in common with her. I was so happy when that turned out to be true. Our first night in Toronto, Rainbow and I met for dinner. By the end of dinner I felt like I had made a friend.

During my two days with Rainbow I kept thinking that I have the best job in the whole world. I kept instagramming and tweeting using #ILoveMyLife. I thought I would share with you a few of the many photos that I took on my trip. 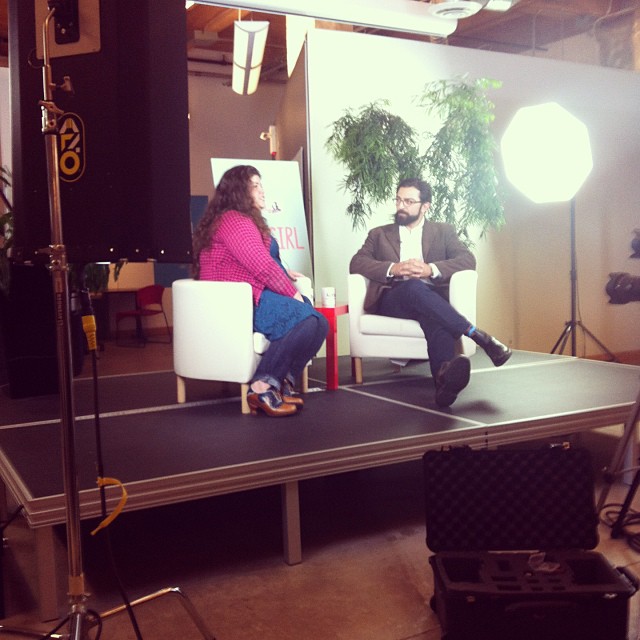 Our first activity was heading to the Kobo offices. We had breakfast with some of the Kobo staff, then Rainbow did an interview with Kobo’s Chief Book Lover Nathan Maharaj. 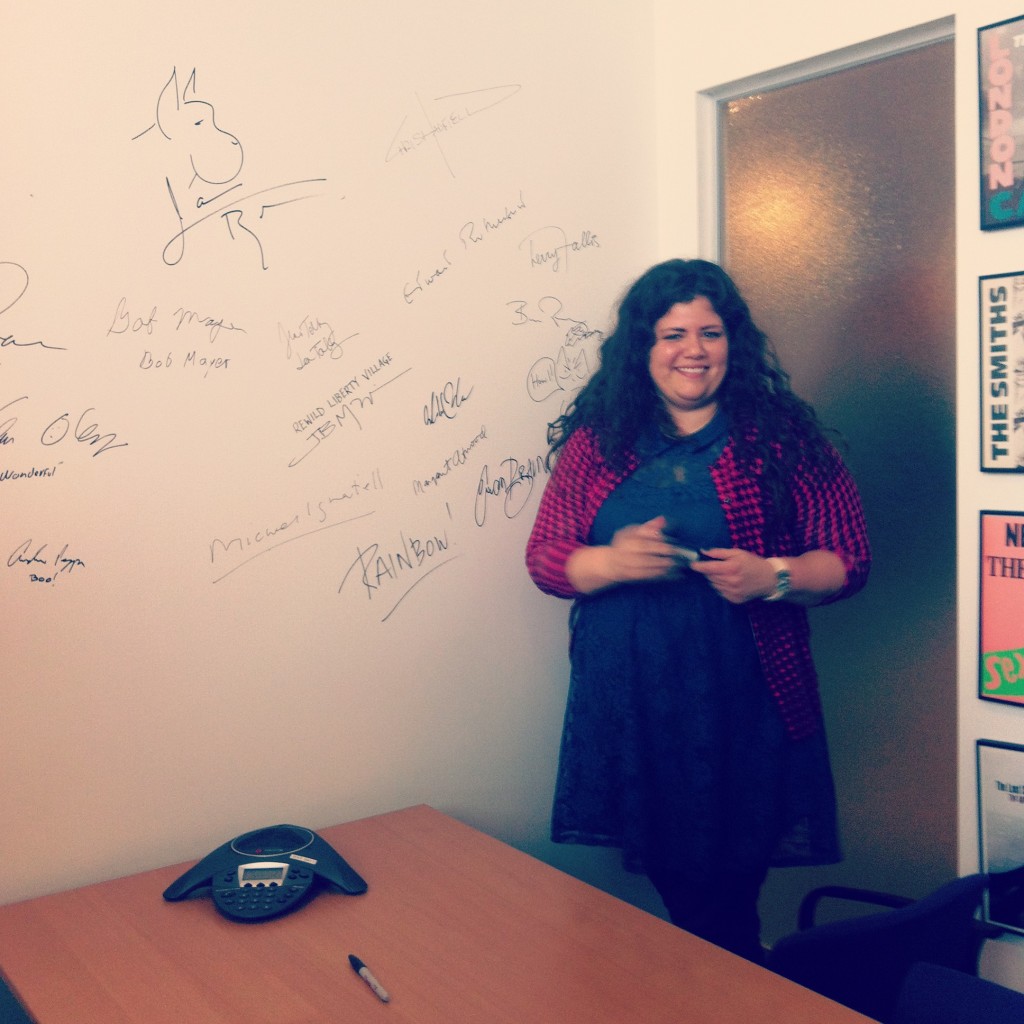 After her interview, Rainbow signed the Kobo Books author wall. 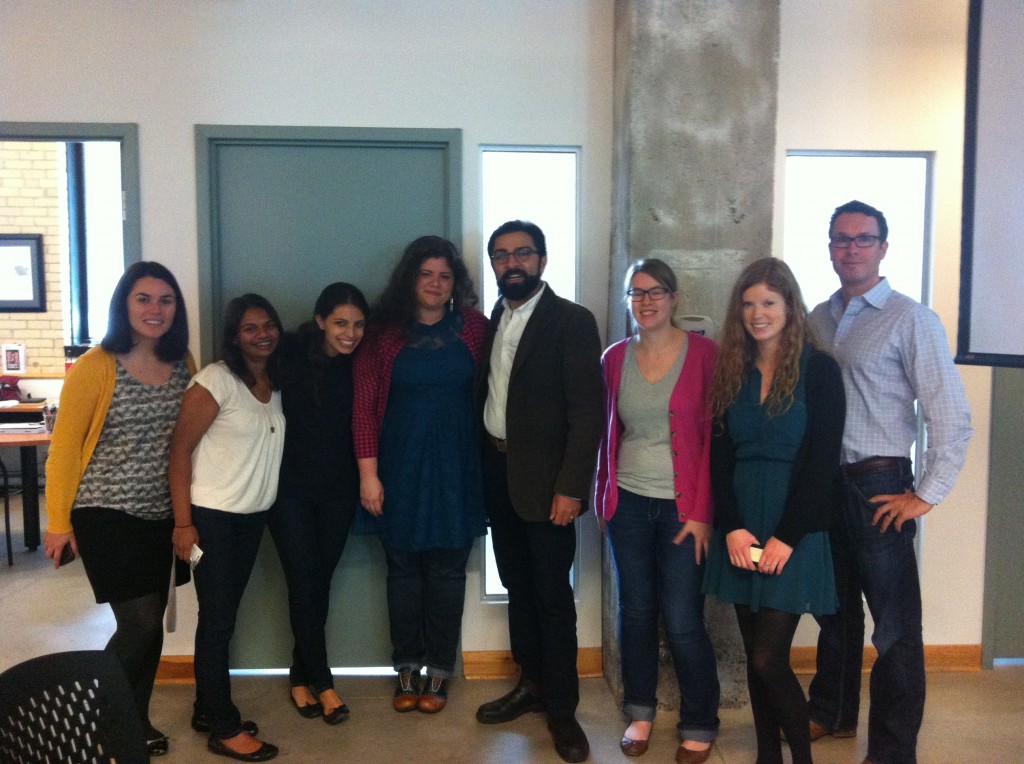 Then she signed books with staff and posed for pictures. 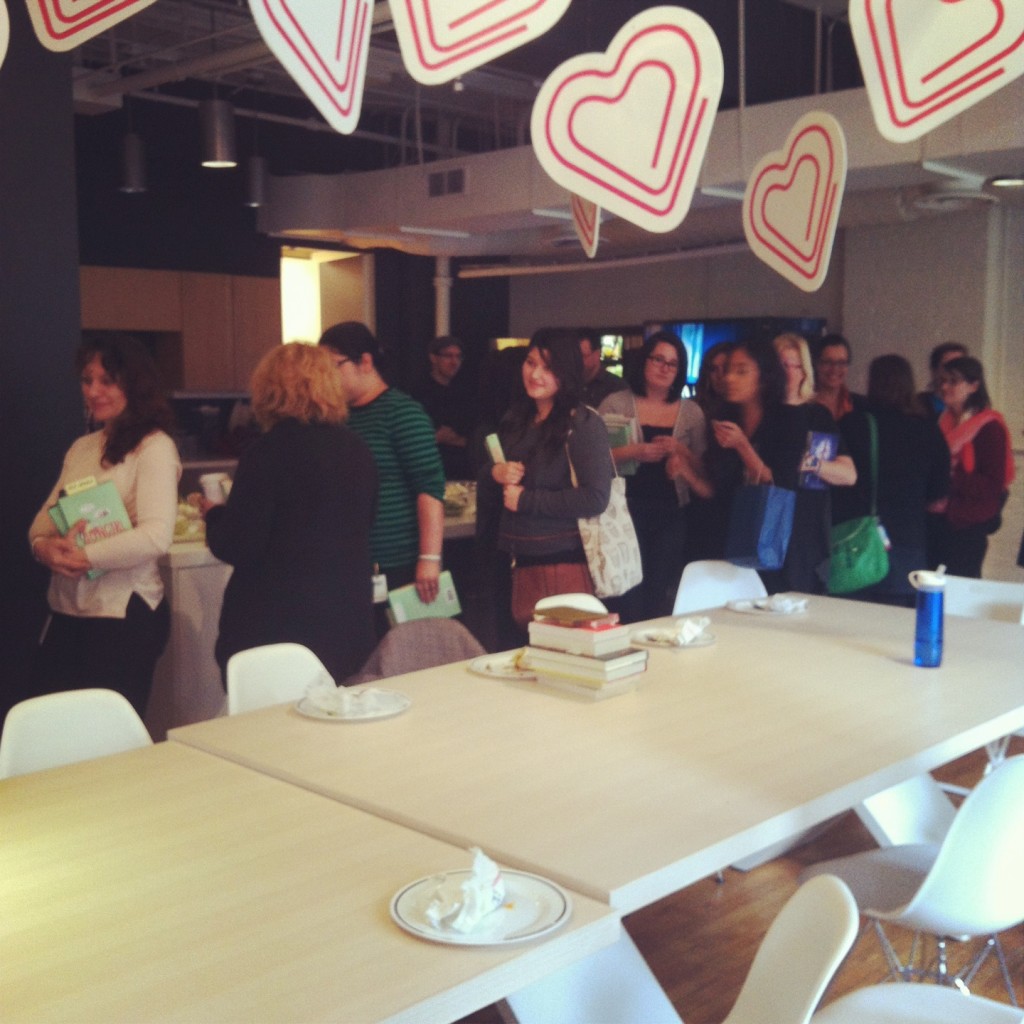 Next we were off to Indigo’s head office where Rainbow had lunch with staff. 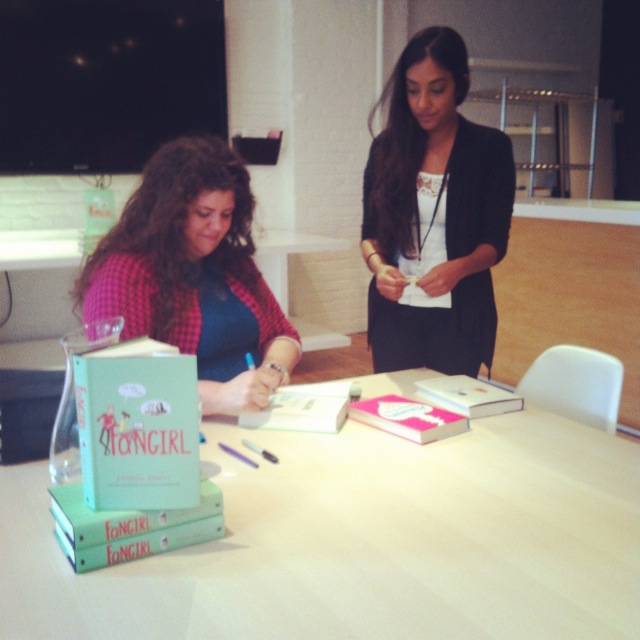 Then signed all of their books. 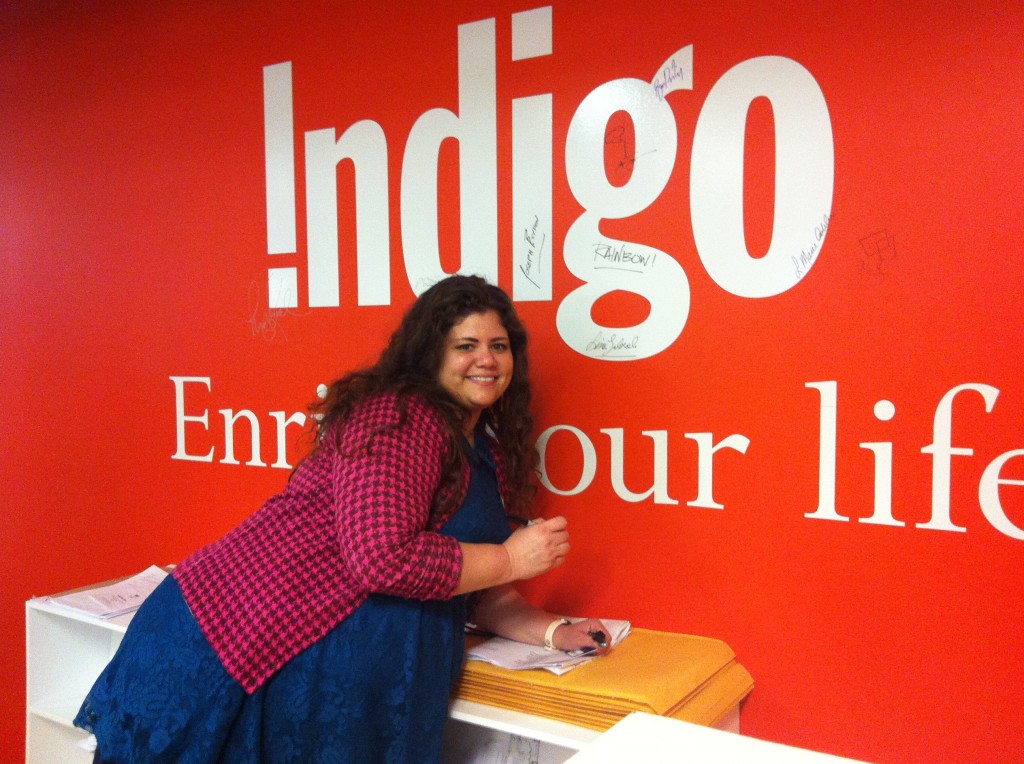 She also signed their wall… apparently signing walls is a new phenomenon. 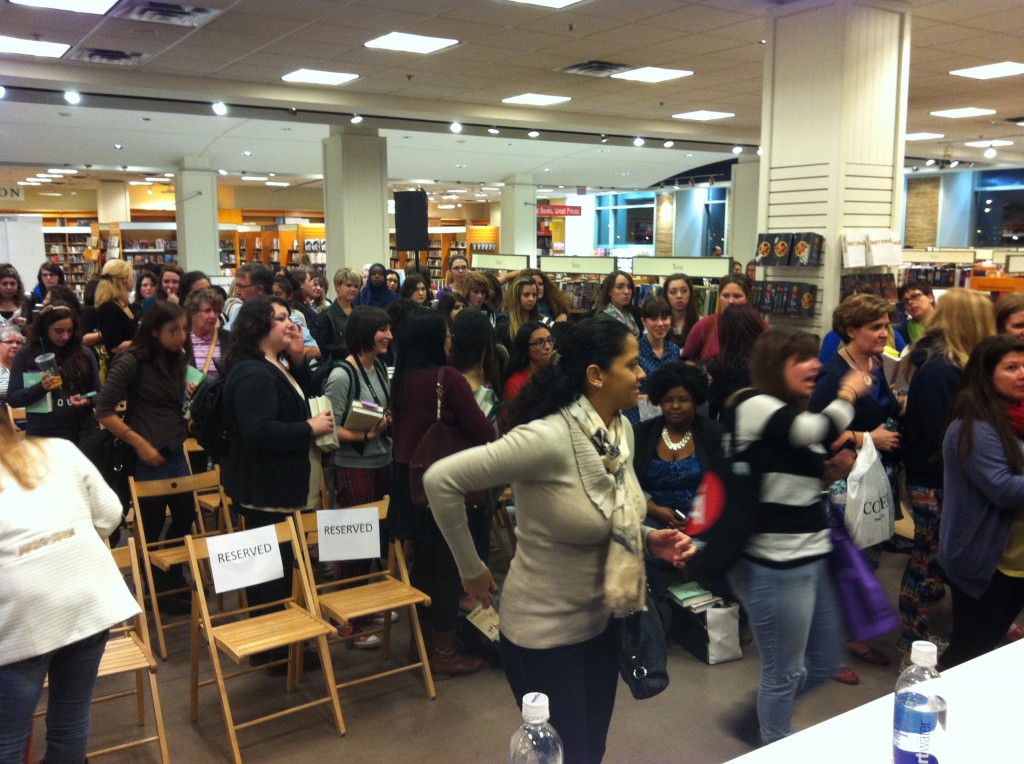 Later that night Rainbow did an event for 200 of her closest fans. She signed books and chatted with fans for 3 hours. We guess that she signed approximately 300 books! 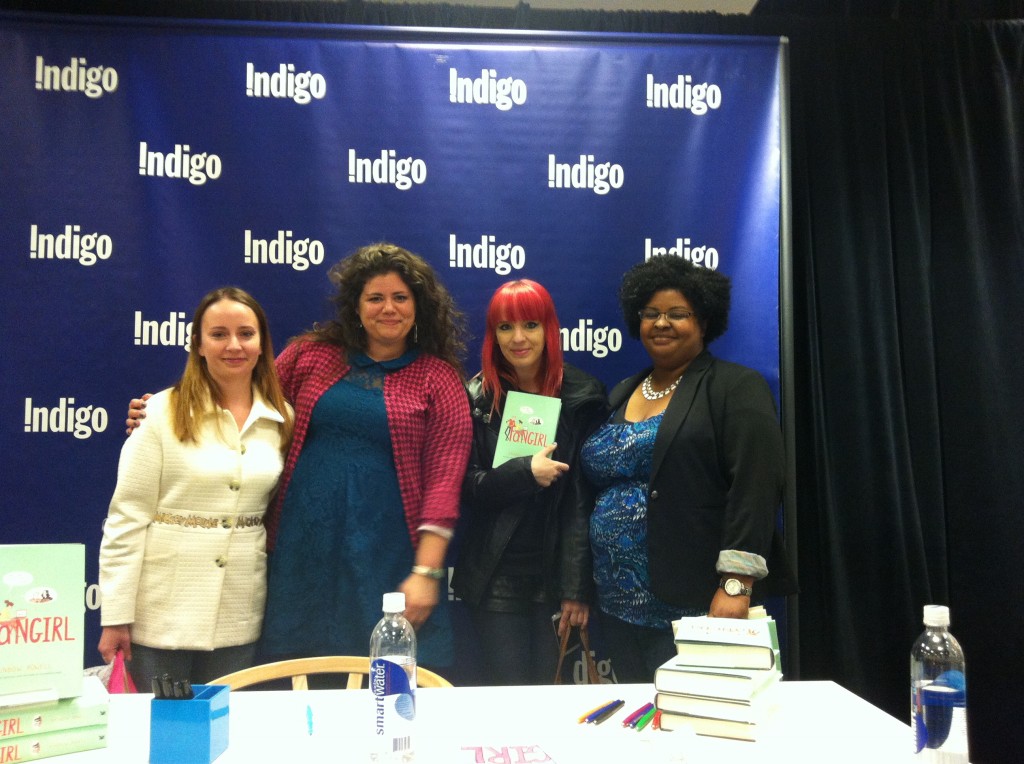 Here she is with some YA Book Blogger Fans. From left to right Kellie from Word Nerd, Rainbow, Becca from OMFG Books and Nicole from Nicole About Town. 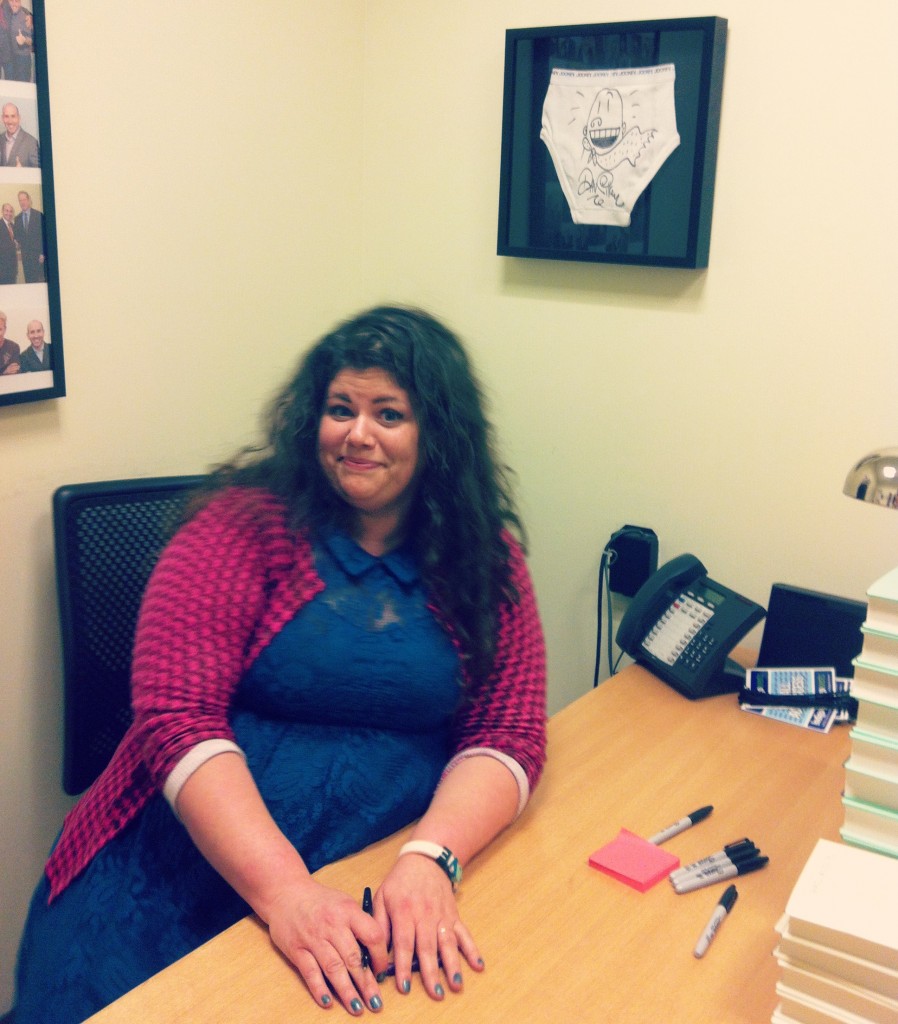 After Rainbow signed a few more books right underneath a pair of underwear signed by Dave Pilkey the author of Captain Underpants. 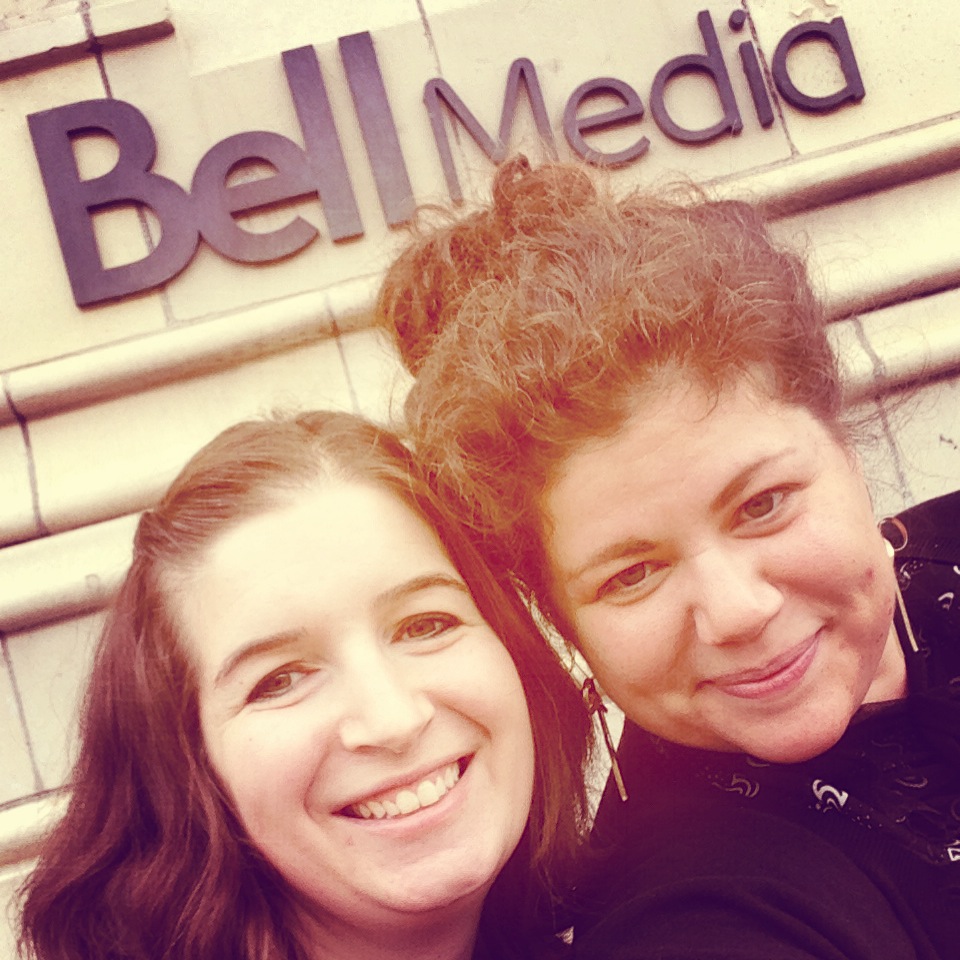 The next day Rainbow was invited to be on the TV show The Social. Here we are outside of the building where the show is filmed. 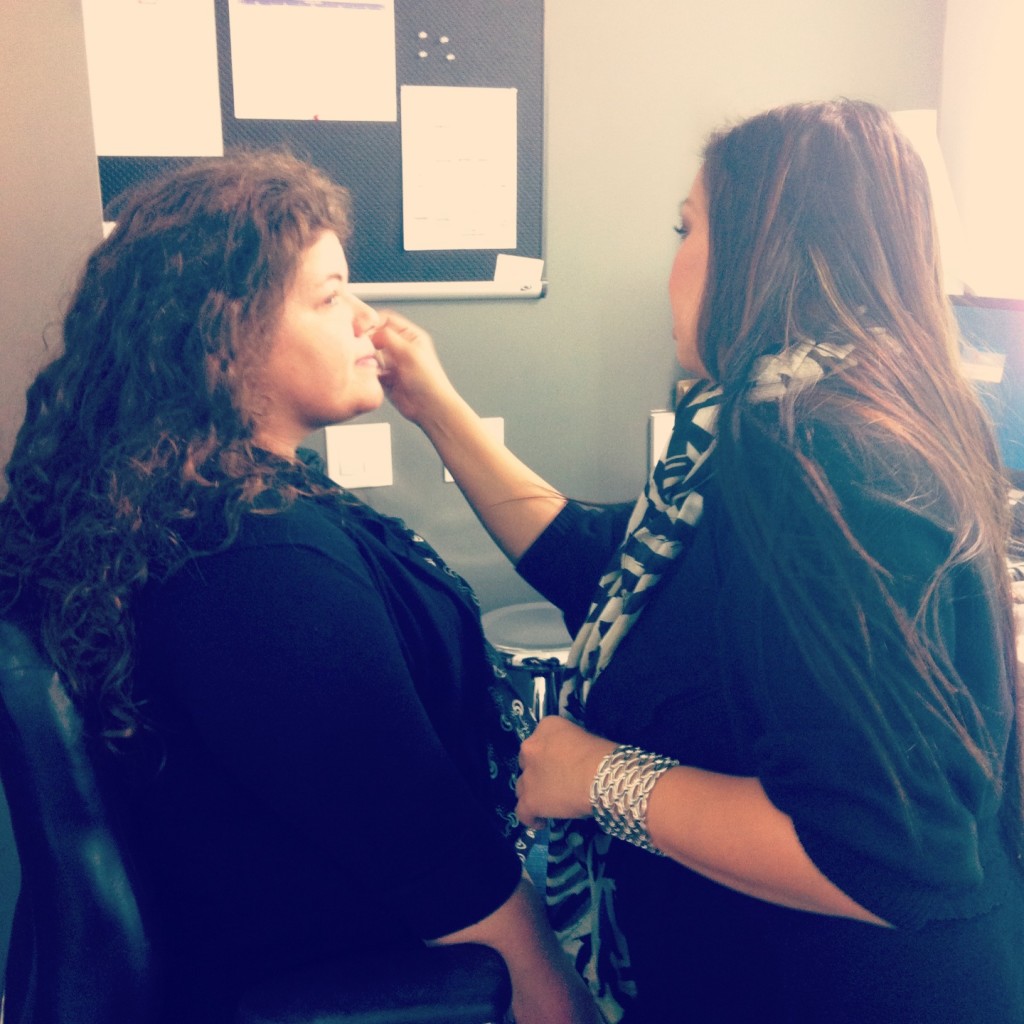 Here Rainbow is getting camera ready for the show. 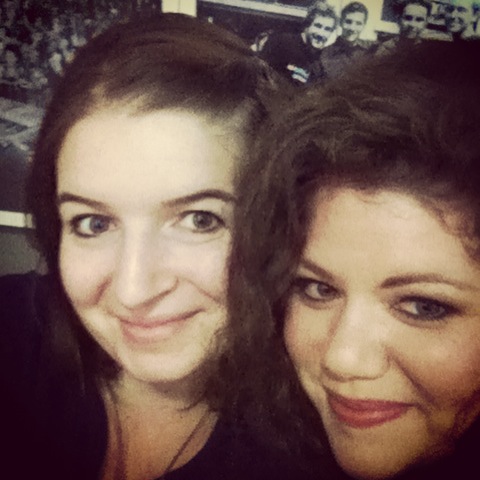 Rainbow and I were hanging out on the couch in the greenroom, taking selfies and chatting when suddenly co-host Lainey knocked on the door and came in. 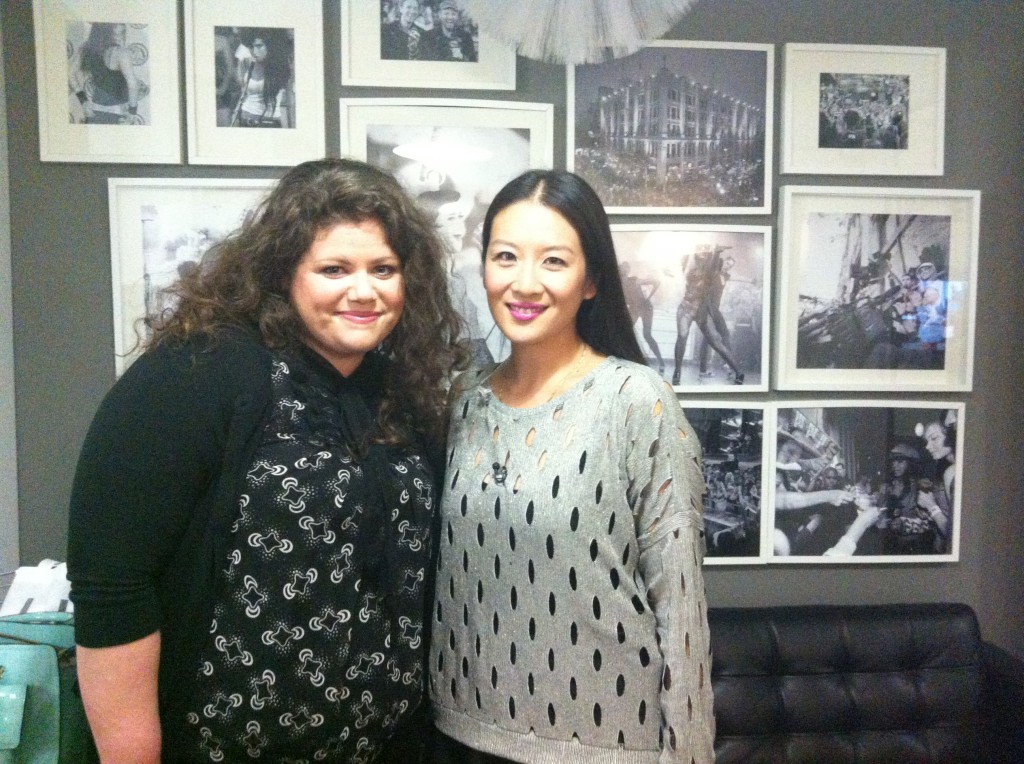 It turns out that Lainey is a huge fan of Rainbow and her book Eleanor and Park. Lainey and Rainbow both got a bit teary eyed as Lainey gushed about how much the book had impacted her life. Lainey even quoted from the book several times which you could tell made Rainbow’s day. Lainey wrote a beautiful post about Eleanor and Park on her blog that day as well, you should really read it. 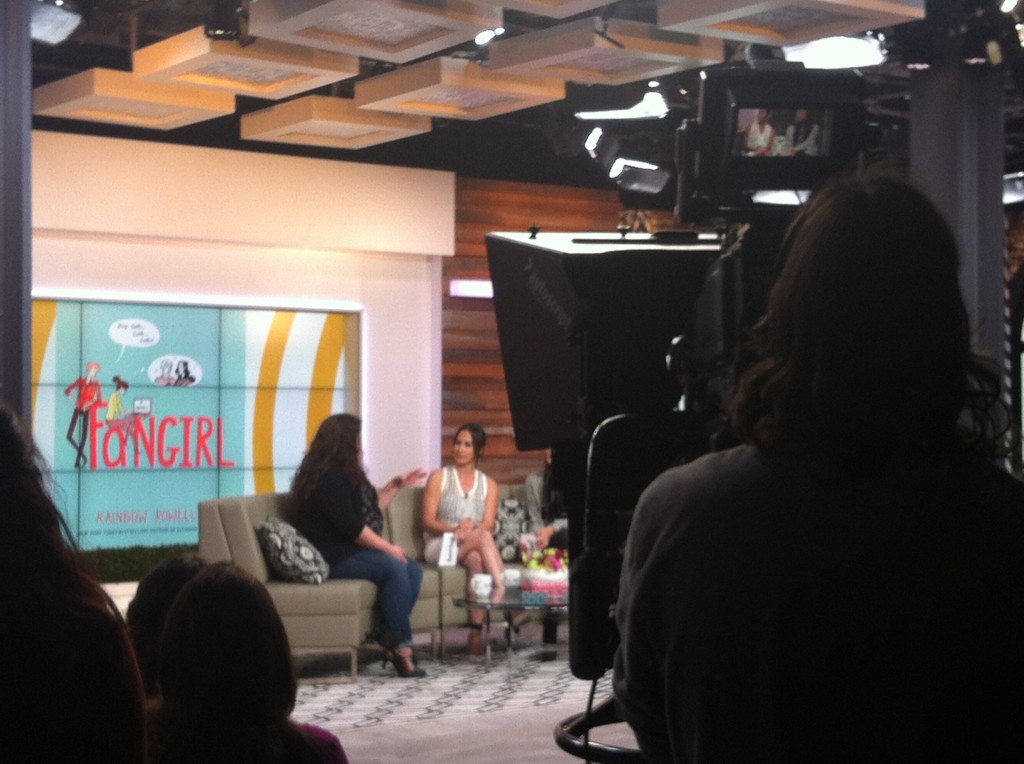 Next thing you knew, Rainbow was up on stage being interviewed! 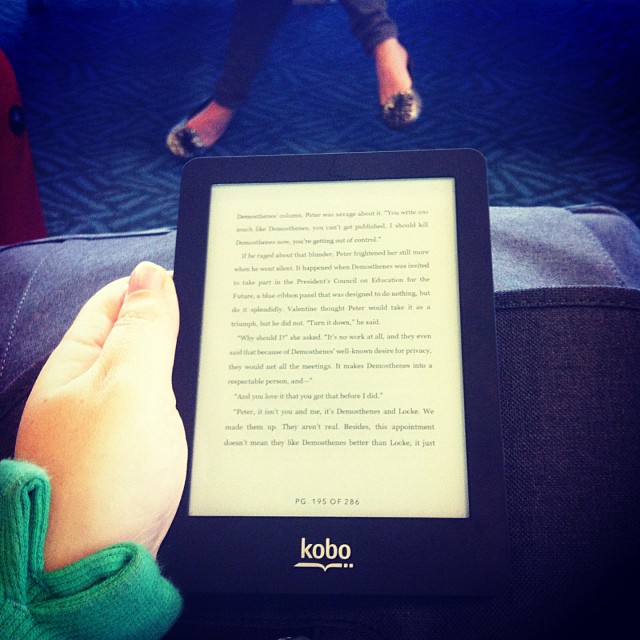 In between all of that busy-ness, Rainbow and I had time to have lots of girl chats about marriage, kids, family, writing, childhood, love and inspiration. It was one of those trips that was so go, go, go the entire time. I feel like it’s taken me a few days to decompress from the trip, my mind keeps going a million miles a minute. As silly as it might sound, I really miss hanging out with Rainbow. I feel like I made a new friend. It’s always so nice when you love the author just as much as you loved their books.

This definitely is not what every day looks like in the life of a Children’s Book Publicist, but it’s definitely one of my favorite parts of the job.

Tell me… What do you do for a living? What is your favorite part of your job? Have you read any of Rainbow Rowell’s books? Are you as much of a fangirl as I am?