Yesterday I had a big harvest of tomatoes come in from my garden and it seemed like a great opportunity to make a big batch of my Oven Dried Tomatoes Recipe to freeze for the winter.

These tomatoes are so good. Oven drying the tomatoes intensifies the sweetness of the flavor. Don’t be afraid to make these with cherry tomatoes or grape tomatoes from the grocery store if you don’t grow tomatoes of your own.

I shared my Oven Roasted Tomatoes Recipe at the beginning of the summer, but since I made up another batch it seemed like a good time to revisit the recipe.

I freeze the tomatoes when they are done oven drying and use them throughout the year on pizzas, in salads, in omelettes, in pasta… really they are delicious in just about everything.

Yesterday I decided to do a version of my oven dried tomatoes recipe that cooks slower than the version I shared at the beginning of the summer. Choose the version below if you have lots of time or this Oven Roasted Tomatoes Recipe if you are in more of a hurry.

-Tomatoes (grape tomatoes, cherry tomatoes, I’ve only made these with small tomatoes but you could probably do it with bigger tomatoes too)

1. Line a baking sheet with parchment paper or tin foil and preheat your oven to 225 degrees.

2. Cut your tomatoes in half, place them in a bowl and toss them with a bit of olive oil (enough so that your tomatoes get a nice even coating but not so much that they are drenched in oil) and a sprinkle of sea salt

3. Pour tomatoes onto your baking sheet and put them in the oven. Leave the tomatoes to slowly roast and dry. You want the outside of the tomato to be crinkled and chewy but the inside to still be moist. Yesterday my tomatoes were in the oven for about 4 hours. I set my kitchen timer to check on the tomatoes every half hour.

4. When they have reached your desired level of chewiness take them out of the oven and let cool. I occasionally toss them with a bit of pesto at this point. I left them as is yesterday. You can then freeze them in a freezer safe container or freezer bags or eat them all right away. 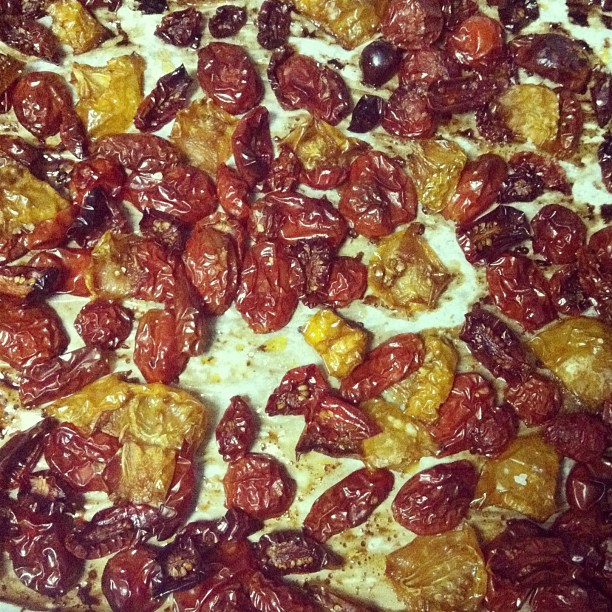 Don’t let their crinkly, wrinkly appearance deceive you… these tomatoes are seriously delicious.

Tell me… Do you “put up” food from your garden for the winter? What are some of your favorite canning and preserving recipes?