Autumn has officially hit in Vancouver, BC and that means fun fall activities like apple picking, corn mazes and hitting the pumpkin patch. The hubs and I are truly lucky to be raising our family in such a magical place as Vancouver. There are so many fun things to do that are just a car ride away. Yesterday as Bean and I were driving home from gymnastics I was looking out the window at the blue sky and the falling leaves and suddenly I got an urge to go apple picking. I’ve never been apple picking before, but my friend Heather from Mother Your Business went the day before and suddenly it seemed like a grand idea.

I went home and googled Apple Picking Vancouver and found the website Pick Your Own. The website features cities across North America with links to farms where you can go to pick your own produce. They have farms with everything from apples to berries to nuts to honey!

I searched the site and found apple picking at Willow View Farms, located in Abbotsford, BC– about 1 hour outside of Vancouver. We loaded up some snacks, our red wagon and a box for apples and set of for a family adventure. 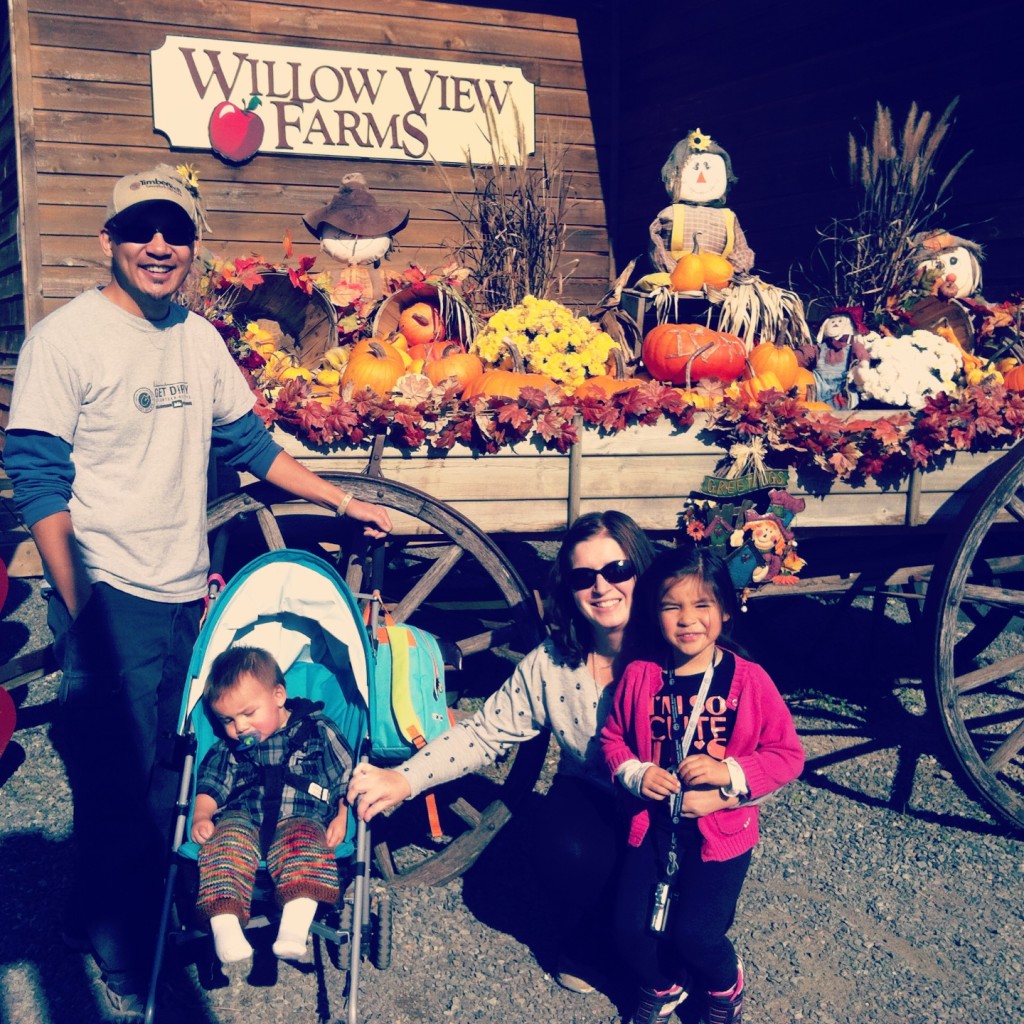 Family run and operated since 1960, Willow View Farms is a perfect autumn wonderland. There is no charge to enter the farm, but there are lots of fun things to see and do including fields for apple picking, a pumpkin patch, corn fields where you can pick your own corn and tons of great photo opportunities. 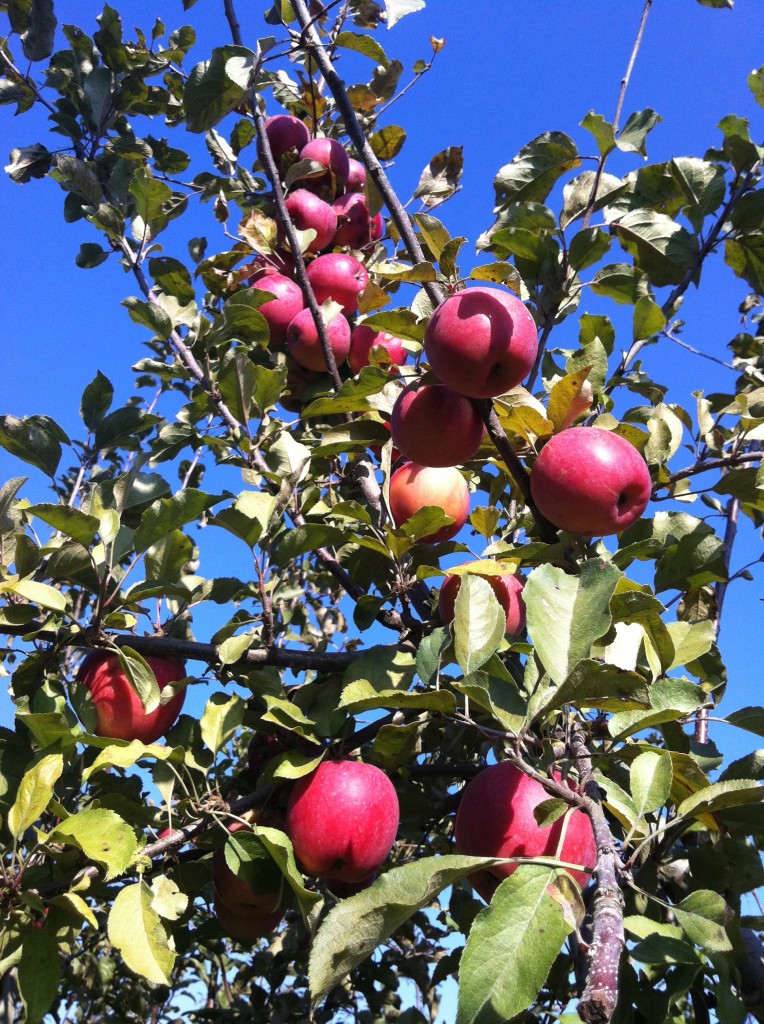 I had never been apple picking before. I felt like I had entered my own personal paradise. Long beautiful rows of many varieties of apples, a sweet crisp smell in the air and beautiful blue sky as the backdrop. 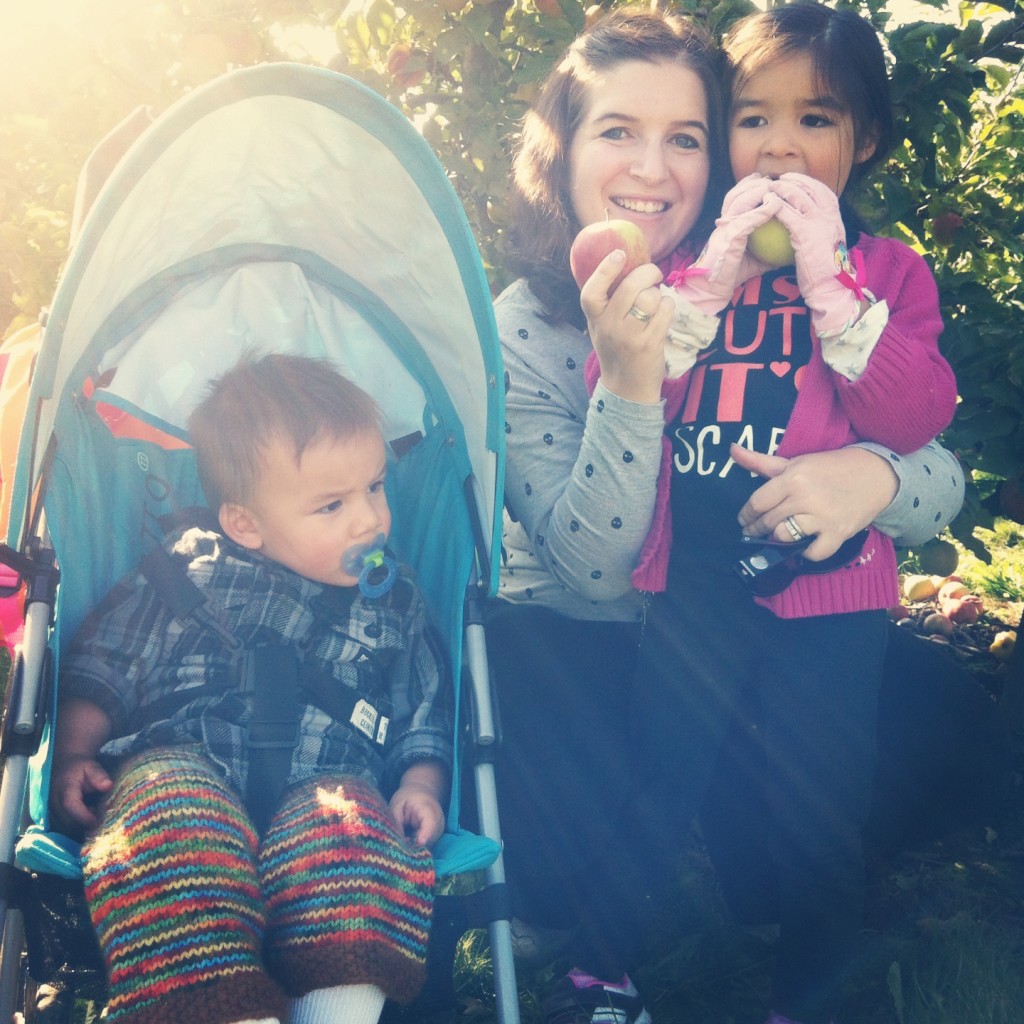 Apples are just 79 cents a pound. We spend a good hour walking up and down the rows of trees, looking at the different varieties (they give you a map with what rows are ready to be picked), taking photos and picking apples. 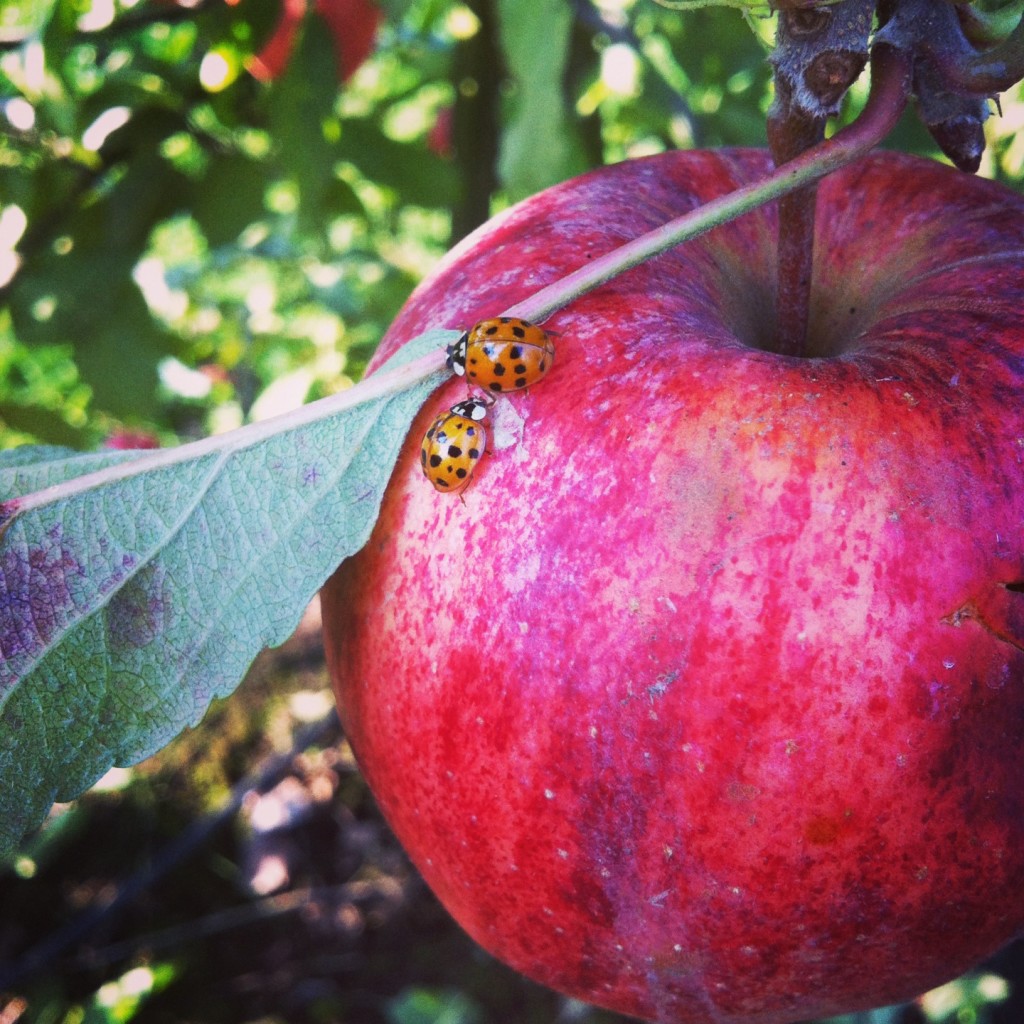 The field was full of lady bugs which Bean loved. Every time she saw one she squealed in delight and wanted to interact with them. Bean found these two lady bugs on this Fuji apple and called me over to take a picture. I’m so glad I did. It’s my favorite, non family, photo of the day. 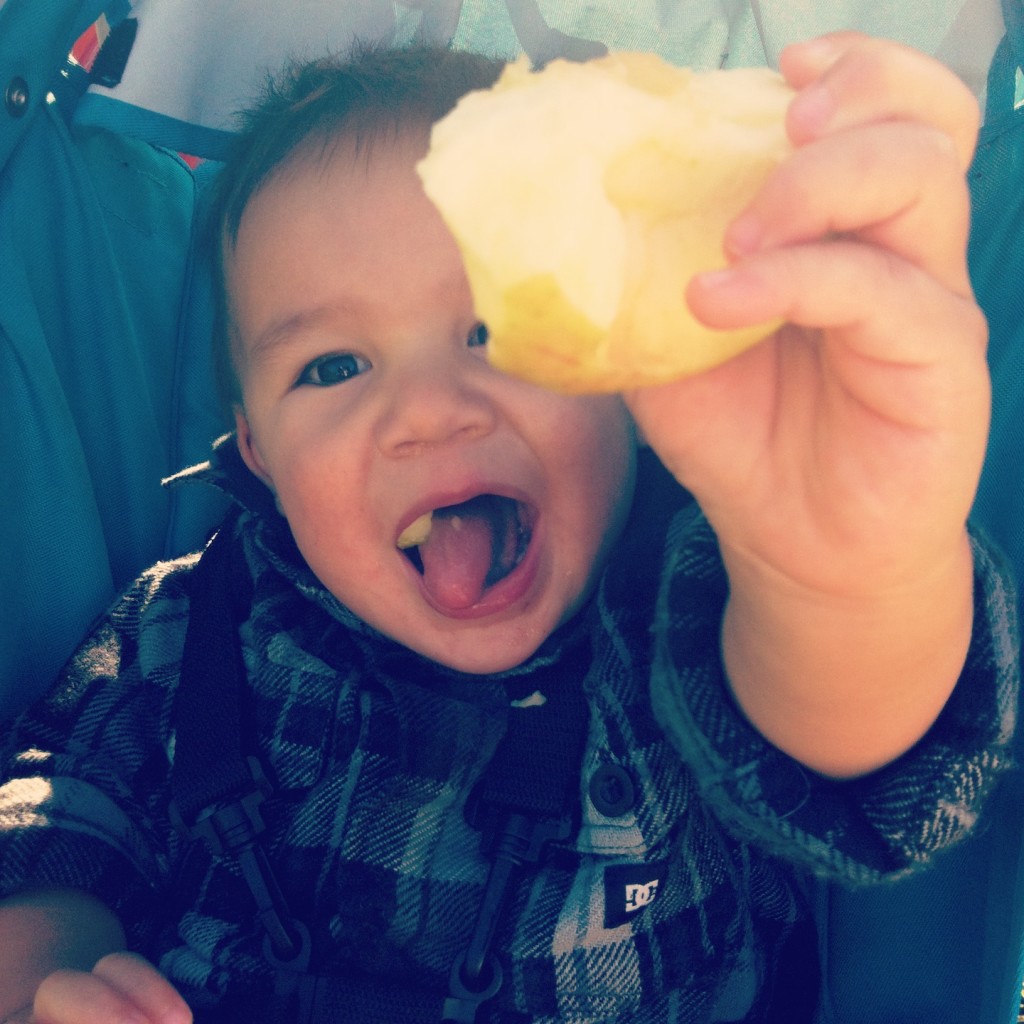 My kids ADORE apples so both Turtle and Bean were easy to keep happy while we wandered the apple fields. 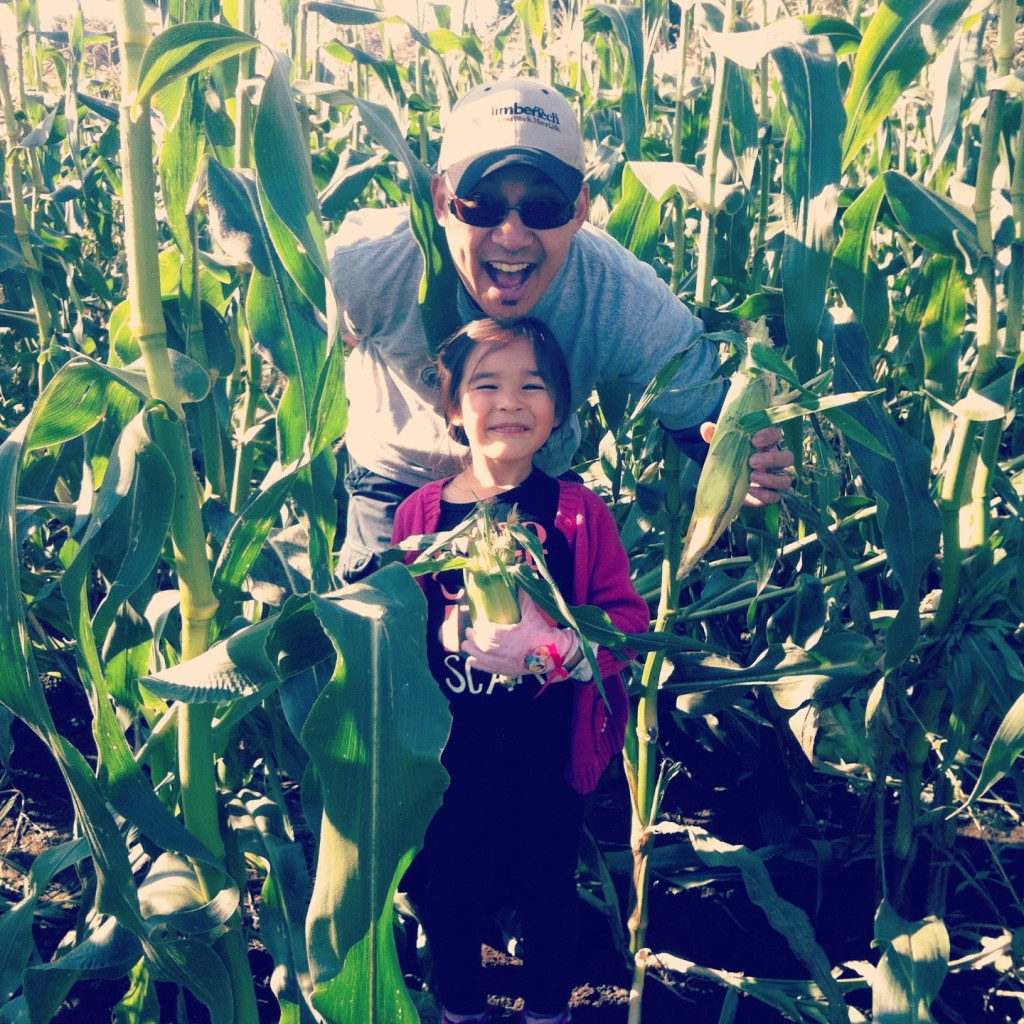 Next we headed over to the corn field. The corn stalks were pretty dense and Turtle was in his stroller so the two of us watched from the sidelines as The Hubs and Bean got lost in the corn field looking for corn to bring home for dinner. I’ve never heard of a farm having U-Pick corn before so this was a special treat. 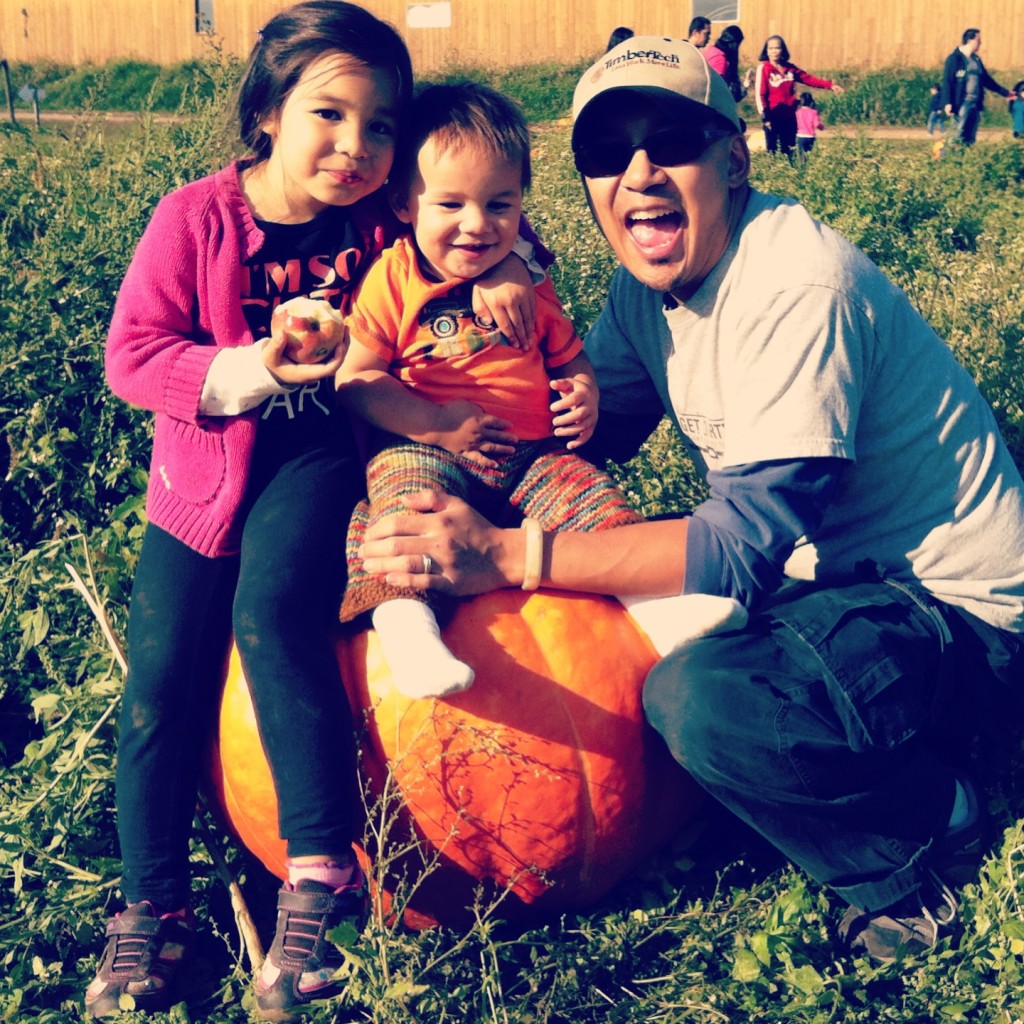 After the corn and apples were picked we headed out to find a pumpkin. Not only is there great apple picking at Willow View Farms, there are also several fabulous pumpkin patches. One area had GIANT pumpkins like the one that The Hubs, Turtle and Bean are posing with above. Willow View Farms has pumpkins ranging in price from 85 cents for little ones to $25 for giant pumpkins like the one in the picture. Most of their pumpkins are $1-$6.00 for your traditional jack-o-lantern varieties. I have never seen a pumpkin patch have so many unusual pumpkin varieties to pick from. They must have had at least 10 different varieties including white pumpkins, cinderella pumpkins, red warty things and peanut pumpkins. 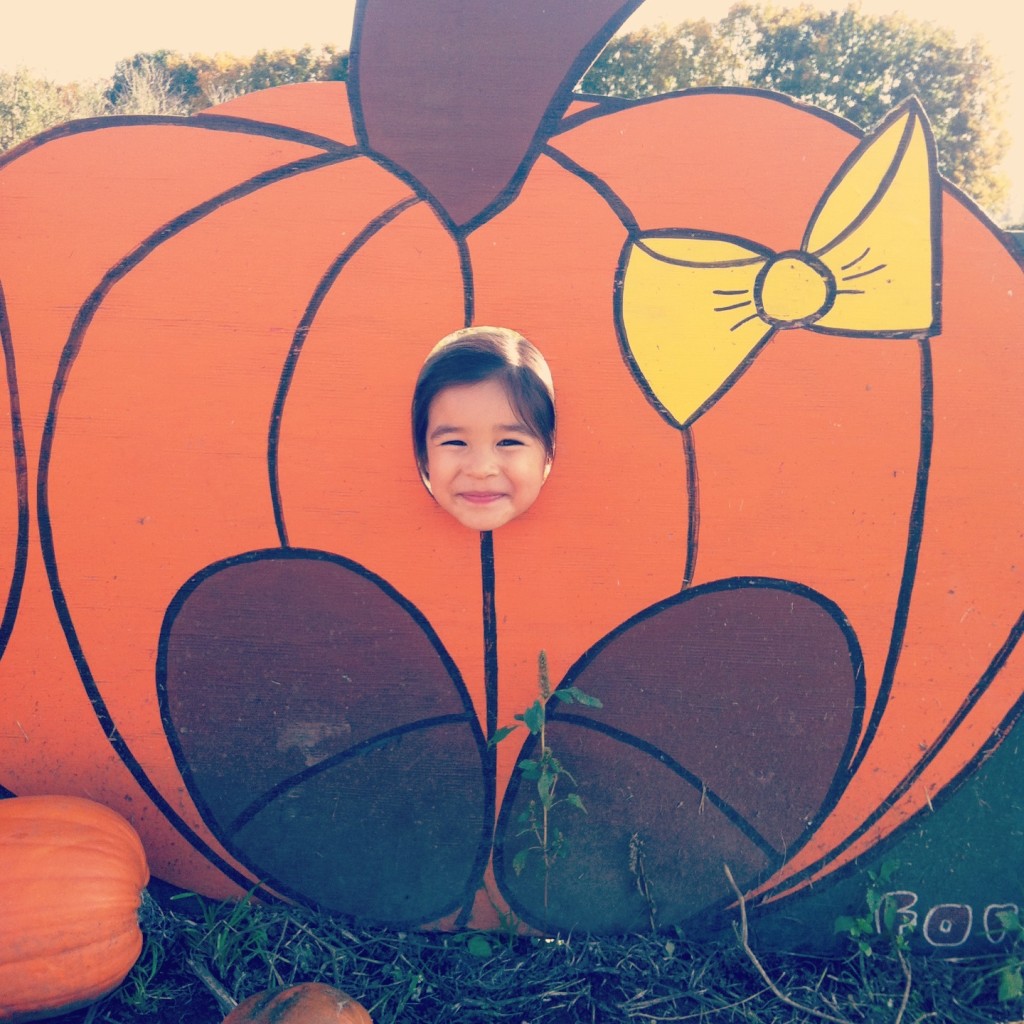 This pumpkin was not for sale. 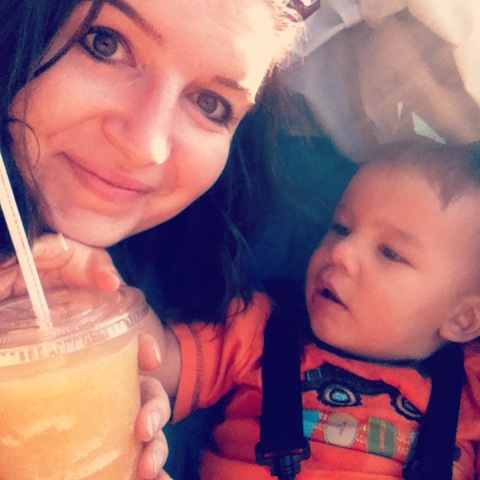 What do you do after a long afternoon of the pumpkin patch and corn and apple picking at Willow View Farms? You hit the country store and pick up an apple cider slushy of course! Make sure you stop for a quick play before heading back home. Willow View Farms has a beautiful little playground for kids to play on.

We had such a nice day apple picking at Willow View Farms. We are going to make a visit there an annual Autumn family tradition.

Next up for my family? A batch of No Peeling Required Crock Pot Apple Sauce!

Tell me… Have you ever been apple picking? What are your favorite autumn family traditions?