There is no game vs Daze Puzzle

In this post, we will compare and analyze two mysterious Hard Puzzle Games, “Daze” published recently in 2018 and There is no game published in 2015. Although both Android Puzzle Games are presented in a mysterious format, there are major differences.

First we review how they start. The Daze puzzle game goes to the first stage by showing the name of the company, without introducing the type or mode of play. To do this, it uses a green drop-down menu. The other puzzle game There is no game Starts by writing the name of the game like a banner and a male voice tells the gamer that this is not a game!

Both games at the beginning used the principle of surprise to get started. In There is no game this principle goes on for a while, but in Daze from the second stage it is mentioned that this is a step-by-step puzzle game.

The Daze game is a step-by-step game and the gamer goes to the next step by going through each step. But the game There is no game is a fictitious trend, and all of its parts are interrelated.

Daze requires a minimum knowledge of English so that the gamer can go through various stages. While the player of There is no game should have a modest understanding of English or French to be able finish the game.

One of the prerequisites for each game is defining the age group of its audience. In this case, the Daze game includes different age ranges from children to seniors, but the type of game There is no game is designed to include the age group of adolescents to adults.

The first reason for this difference is the Difficulty level of these two games. There is no game, has a higher level of difficulty than Daze, and it is hard for the child’s age category. The second reason is the start of the game, There is no game starts like other games in horror genre, and from the very beginning the narrator begins to threaten the gamer, and these threats continue until the end of the game, so this game is not suitable for children and elderly people who have a more subtle, less risky attitude. The third and final reason is that Daze Android Family Game provides a fun and joyful atmosphere for gamers but There is no game does not have such a space.

In the analysis of these two 2018 Android Puzzle Games graphically, it should be noted that the type of graphics used in the two games is completely different.

The Daze Android game uses a multi-color graphics without any image or animation, and has been very successful in this work, while a gamer completes each step, a green color covers the screen in a cascading manner, and the game goes to the next step without interrupting the image. At each stage, incomplete instructions are provided to help the gamer in the game, which increases the readability of these entries by filling the background color. But the game There is no game has an image oriented graphic, which, with no exaggeration, can be said to be the worst possible use of images and colors. Apart from the first part, which is designed as a banner and fewer moving pictures and seems to be acceptable, the rest of the sections are completely imperfect.

The mini-game section of this game on the second screen is a copy of the Atari console game, which not only has not developed, but the movement of its rocket sector is much slower than the original game and during the mini-game, it causes the gamer to become nervous. The third part of the screens is a fixed image of a goat in a cage, along with a tiny stream of water that the creators did not even bother themselves with animating it. The tree’s growth on the primary screen also has a changing images mode and no animation has been used.

The pinnacle of the tasteless designers of the game is in the top screen, which has a green-colored tree that is more like a green bundle than a tree. To illustrate the disruption and destruction of the environment, or as narrator says “destroyed my life”, designers could use other elements such as fire, earthquake, or disordering of the game environment. Instead, they use the simplest possible colors in the form of a square, which during the game looks like a graphical error or programming bug. In total, graphics of There is no game does not receive any pass scores.

The Daze Free Android Puzzle Game has a low volume soundtrack that makes gamer more focused. Vice versa There is no game, according to its genre, has used a high-volume jazz in some parts of the game that has added excitement to the game. 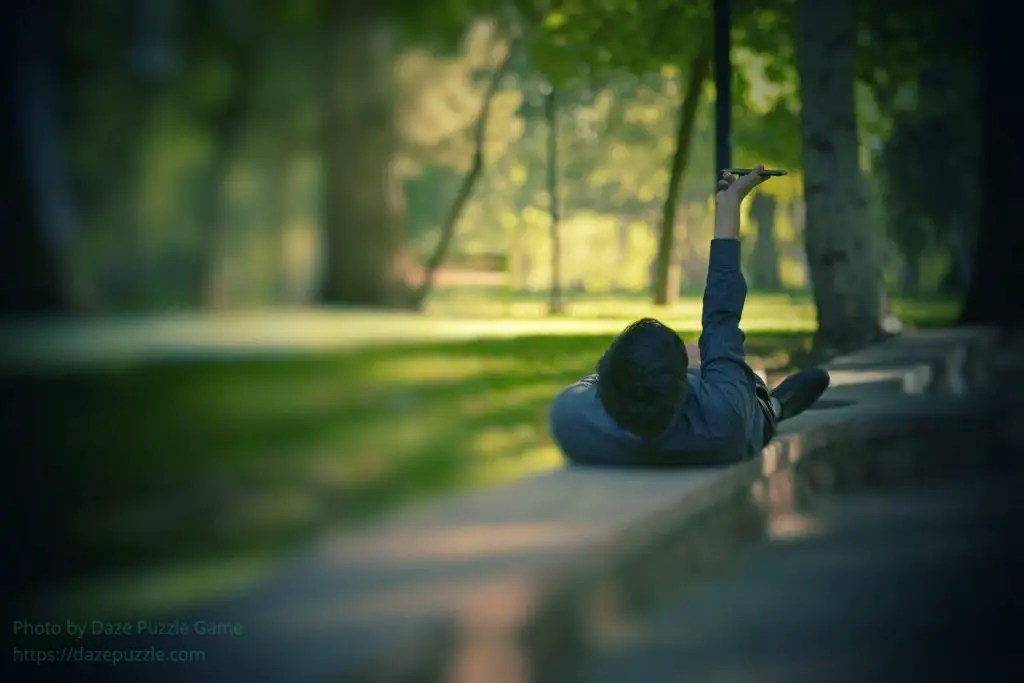 Daze has benefited from many sound effects during different stages, including animal sounds, sounds of nature, laughter, and joy, which makes the gamer a refreshing and cheerful environment. In addition to the sounds, one of the most important sounds of the Daze puzzle game is a beautiful female voice that guides the gamer at most stages of the game and adds the fascination of the game. There is no game has also benefited from sound effects. The most influential sound effect in this Android game is the male voice that creates the excitement, wonder and humor of the game and it can be considered as the most important point of it. The sounds of the breaking of the objects, the sound of the objects colliding with each other, the sound of the goats and … are used in the game, but the variety of sounds used is not as much as the Daze Android Puzzle Game.

The process of Daze is such that it gradually gets harder and harder to solve puzzles, but in the game There is no game, the hardest part of the game is in the middle of the story, and after passing through this section, it’s not hard to finish the game.

Both games are on the Android platform. The Daze game is available only in English. But There is no game in addition to English, has a French subtitle that can be selected at the beginning of the game.

The duration of the game

One of the major differences between these two games is the time to finish them. The Daze game has a hundred steps and a longer time to play the game. While There is no game is a short game and it can be finished in 10 minutes or a quarter.

Considering above analysis and comparison, we let you, dear readers, to do the final comparison of these two games. Please leave your comments about this blog and the other best thinking puzzle games in the comments section of this page.